This game is derived from the combination of three myths and folklore- Athena \ Athene (Greek), Narcissus (Greek) and The Blue Hunter’s Moon.

Just like her case with Arachne who she turned into a spider (Arachnid) because Arachne’s work of art is better than hers, Athena (Athene) is a Greek Goddess who is blessed with creativity among her numerous talents.

The Narcissus part of the game looks at pairing an object but with a view of finding the listed name and its coordinating icon. Just like when Narcissus died, and a flower grew on the exact spot and the flower is called Narcissus.

The third part is the Rare Blue Hunter’s Moon on Halloween day (31 October 2020) which is visible to the world in all time zone (appeared last in 1944 and 2020),  appears on Halloween day (once every 19 years) and have mythological storytelling of the spiritual realm and more.

Suitable for all age levels, this is a fun and creative game which enables the player to memorise as well as enjoy random-puzzle challenges while it focuses on the Creative Sector.

In this game, after Athena turned Arachne into a spider and terror came upon all creatives (artists and craft person), the search for a new craft goddess who is supportive begins.

In this timed game of twenty seconds for each scene, the game starts with the player looking at the artwork of Athena, the artwork starts fading to prevent recreation. The artwork returns in puzzling pieces and the player need to place the puzzle pieces in their proper position. Pomegranate, the mystery fruit, and score increase are the rewards anytime a puzzle piece is placed correctly.

The player is teleported into Athena’s Isometric Maze Treasure Chamber or room to collect icons of the creative industry listed on the right of the screen. Athena’s Statue chases the player.

The player is then teleported to the place of The Blue Hunter’s Moon to be turned into a goddess or sacrificed. The player tries to get to the Moon  Castle without colliding with any Halloween Worshipper while the moon phases (new moon, waning crescent, waning gibbous, third quarter, waxing crescent waxing gibbous, first quarter) rotating in their own axes protect the player. If the player wins the Moon in its Lunar Corona crowns the player as the new goddess but if the player loses, the moon turns into a blood moon and the player is clothed in red.

The score for the first section is 11 and turns into 12 because there is a significant with numbers. 12 is the number of perfection.

The score for the second section is 22 and turns into 24 because it is double completion.

The score of the third section is 84 while the total score is 120 years because this is to be the maximum years of God's Spirit to dwell with a man on the earth as stated in the Holy Bible.

*Instructions for each scene are listed in the menu and on-screen notification pops in each scene as a reminder of what is required for the gameplay.

The goal of the game is to become the new craft goddess by overthrowing Athena.

The challenge of the game is in different sections. The first section is to memorise the artwork of Athena and then arrange the puzzled pieces as the exact artwork. A pomegranate reward and an increase in the score are given for every puzzled piece placed correctly. This section lasts for Thirty Seconds- The memorisation of the artwork is Ten seconds while the puzzling piece is Twenty Seconds.

The second part of the challenge leads the player to the Isometric maze where Athena's artefacts from each creative sector are kept. Athena's statue will follow the player around the maze, if the player goes too close to the statue, the player loses.

The player will use the "WSAD" or Arrow keys to move (up, down, left and right) and the "Space Bar" to jump when in the Isometric maze because the mouse will not work.

The third section of the game leads the player to a maze park where the castle and the Blue Hunter's moon dwells.

The player must avoid the Halloween Worshippers but can collide with the Phases of the Moon (Waxing Crescent, First Quarter, Waxing Gibbous, Waning Crescent, Third Quarter and Waning Gibbous). The player will use the "WSAD" or Arrow keys to move (up, down, left and right) and the "Space Bar" to jump when in the Isometric maze because the mouse will not work. 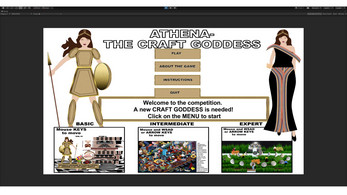 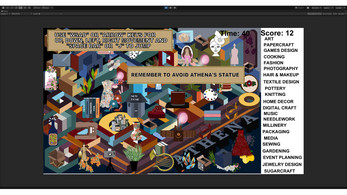 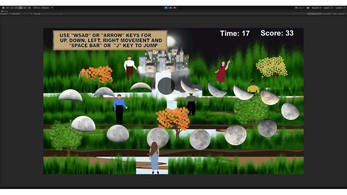 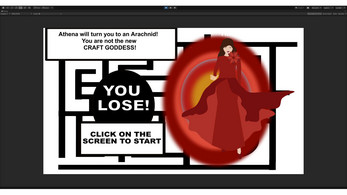 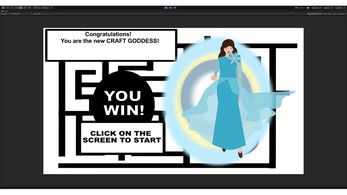